The key working components of a loudspeaker are shown in the diagram below. When an electrical
current passes through a wire coil (the voice coil) in a magnetic field, it produces a force which varies with the
current applied. The cone, connected to the voice coil, moves in and out, creating waves of high and low air
pressure.

Eminence technology and proprietary materials mean that age-old ‘compromises’ of durability against sensitivity,
or power handling against precision of response, are more easily solved than you might imagine. 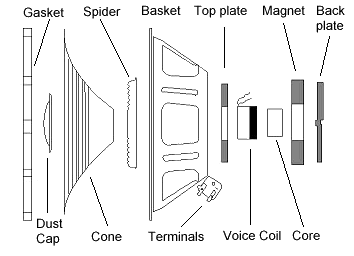 Heatsinks: In the quest for higher power density (more power and hence more sound from less space),
Eminence has progressively introduced heatsink components to selected transducers e.g. cast frame neodymium products and Kilomax. The heatsinks pass through the pole of the transducer or are incorporated into the chassis
of the loudspeaker to transfer heat away from the coil. The air currents caused by the cone movement cool the heatsink.

How to use Axona: Use Axona as directed by your doctor. Azopt was as effective as dorzolamide when used on its own or as an add-on to timolol, with decreases in pressure of between 3. Doctors give cortisone shots during an office visit directly into the area or joint involved, or sometimes just into a large muscle to get it into the bloodstream Generisk Viagra receptfritt. If after four months of using the cream there is little improvement, please discuss this with your doctor who will review your treatment.

Cathy grew up in NY, moved to Florida in 1975 and graduated from the University of South Florida, with a degree in broadcasting. She and her husband Glenn started The Speaker Exchange in 1977. (Glenn later moved into Audio/Video sales and installations). In 1979, Cathy went to California for JBL speaker repair training and later received advanced training from Frank Spain, the then head of the Electro-Voice service department. She has continued to advance her audio education through many CES, NAMM, and CEDIA trade show classes.

2 thoughts on “How a Speaker works detailed”